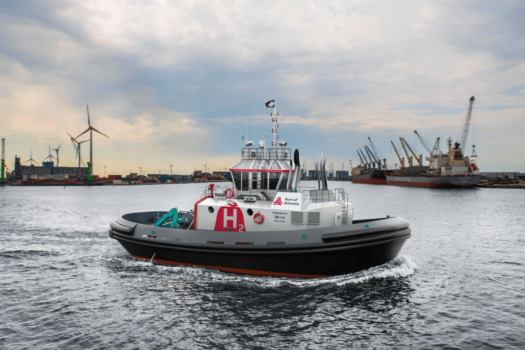 “Investment in hydrogen in a dual fuel engine is a stepping stone towards hydrogen fuel cells in the future. Right now, hydrogen in an internal combustion engine is a very cost effective and smart way to go for decarbonising transport.”

That’s according to Trevor Jasper, Engineering Manager of Low Carbon Technologies at CMB Tech, who was speaking to attendees of the 5th International Conference on Maritime Hydrogen and Maritime Energy this afternoon.

CMB Tech is the research and technology arm of Compagnie Maritime Belge (CMB), a Belgian shipping company committed to zero emission shipping by 2050.

CMB is already the first shipping company in the world to have offset its carbon emission in 2020 and it is designing the power systems of the HydroTug project in the Netherlands.

Set to be a world first, construction is underway on the hydrogen-powered tug, HydroTug, ordered by the Port of Antwerp in Belgium, which is driven by combustion engines that burn hydrogen in combination with diesel.

“The biggest benefit we see in using hydrogen in a combustion engine is that it is the smart way to CO2 reduction as a low cost, low risk technology,” Jasper told conference attendees.

“In terms of using hydrogen in an internal combustion engine rather than a fuel cell, although the fuel cell stack has high efficiency when you take all the power, electronics and load into account, the difference becomes much smaller.”

“Hydrogen as an economy, in terms of the infrastructure to support applications, is in its infancy and it’s reliability is not there yet.”

“So moving directly to a fuel cell application requires 100% uptime of the infrastructure in order to meet the operational requirements of a fuel cell system, whereas a dual fuel system allows flexibility with operation on diesel only in the absence of any hydrogen.”

“The low cost, in terms of Capex, means that you can provide more consumers more quickly and build the hydrogen infrastructure up, so that aspect of it is definitely a big advantage.”

“That’s why investment in this technology tends to be more of a transitional stage, a stepping stone, heading towards fuel cells in the future.”

“But right now, hydrogen in an internal combustion engine is a very cost effective and smart way to go for decarbonising transport.”

Jasper was asked to explain to attendees how hydrogen works in a combustion engine.

“The engine is a normal four-stroke diesel engine and the only difference in dual fuel mode is that hydrogen is subjected into the air stream on the induction stroke,” Jasper replied.

“During the compression stroke, the hydrogen mixes further with the air until close to top dead centre when a small quantity of diesel is injected into the cylinder.”

“At this high temperature pressure of the compressed gas, the diesel auto ignites as it would in a normal diesel engine and that ignition provides the flame initiation for the hydrogen combustion.”

“The bulk of the gas, the hydrogen, then provides the chemical energy release to produce the power raising the temperature of the pressure as a normal combustion engine and then the exhaust gases are exhausted out of the cylinder as a normal four-stroke cycle.”

“Ultimately there are really very, very small differences for running hydrogen in a dual fuel engine.”

Maritime Hydrogen and Marine Energy Conference: Use of hydrogen in shipping