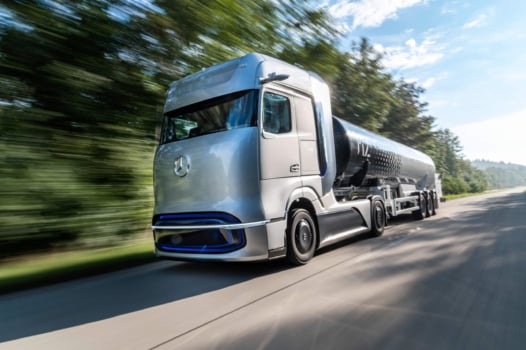 Daimler Trucks has today unveiled its Mercedes-Benz GenH2 Truck in a concept video.

Based on the Mercedes-Benz Actros, the GenH2 Truck will boast a range of up to 1,000-kilometers and more on a single tank of hydrogen.

In its world premier video (see below), Daimler demonstrated which specific technologies it is driving forward in order to commence customer trials in 2023, and series production in the second half of the decade.

The series-production vision of the GenH2 Truck will have a gross vehicle weight of 40 tonnes and a payload of 25 tonnes. Two liquid hydrogen tanks and a powerful fuel cell system will make the vehicle’s performance comparable to a conventional diesel truck.

Daimler said its experts will draw on existing expertise for the development of the liquid hydrogen tanks, as well as cooperating closely with a partner. The manufacturer’s extensive background in fuel cell systems also presents an advantage.

Federal Minister Andreas Scheuer, said, “We need zero carbon goods vehicles on our roads. These include hydrogen fuel cell trucks. There is huge potential inherent in hydrogen for the protection of our environment and a strong economy.”

In addition to the GenH2 Truck, for the first time, Daimler today also presented its purely battery-powered long-haul truck, the Mercedes-Benz eActros LongHaul.

Martin Daum, Chairman of the Board of Management of Daimler Truck AG, said, “We are consistently pursuing our vision of CO2-neutral transport with a focus on the genuinely locally CO2-neutral technologies battery power and hydrogen-based fuel cells, which have the potential to succeed in the market in the long term.”

“With our alternative drive concepts from Mercedes-Benz – the GenH2 Truck, the eActros LongHaul and the eActros – and our electric trucks of the Freightliner and FUSO brands, we have a clear focus on customer requirements and are creating genuine locally CO2-netural alternatives for them.”