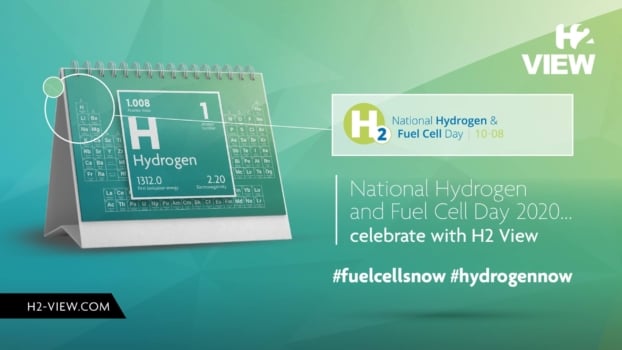 National Hydrogen and Fuel Cell Day: How the industry is celebrating

Hydrogen and fuel cell enthusiasts across the US are today celebrating the sixth annual National Hydrogen and Fuel Cell Day.

Celebrated on the 8th October, in recognition of the atomic weight of hydrogen – 1.008 – the event created by the Fuel Cell and Hydrogen Energy Association now stands as a global opportunity to celebrate achievements in the industry and raise awareness.

National Hydrogen and Fuel Cell Day was first celebrated in America in October 2015 with the passage of an official resolution in the United States Senate and has grown year-on-year ever since.

This year is no different, as companies, organisations and consortiums from across the hydrogen market are gathering together to celebrate one of the industry’s most celebrated days.

So how is the industry celebrating?

The aim of the app, which is available on most electronic devices, is to allow players to experience the difference in productivity and operation when driving a fuel cell-powered forklift, compared to a battery-powered forklift.

Hyundai is celebrating the annual event with a huge celebration, as it announced today that its US fuel cell SUVs, the NEXO fuel cell SUV and the Tucson fuel cell SUV, have together accumulated more than 10.9 million miles, all emitting only clean water vapor.

“Celebrating National Hydrogen Day 2020, we’re incredibly proud of our hydrogen vehicle impact in reducing harmful greenhouse emissions on our planet. As the hydrogen refuelling infrastructure continues to grow, we applaud the exponential emissions reduction it will bring, resulting in a cleaner atmosphere for everyone,” said Olabisi Boyle, Vice-President of Product Planning and Mobility Strategy, Hyundai Motor North America.

As part of an exciting announcement, BayoTech and New Mexico Gas Company (NMGC) today announced a new collaboration through which they will explore opportunities to develop New Mexico’s hydrogen economy and establish the state as a hydrogen hub for the US.

In celebration of National Hydrogen and Fuel Cell Day, BayoTech also shared a company video on its social media channels.

The US Department of Energy, who has done many things in celebration of the day, today shared five facts about its [email protected] vision and projects to help raise awareness of hydrogen and fuel cell technologies.

Shared today, the five facts are as follows:

Hawaii is today celebrating the sixth annual National Hydrogen and Fuel Cell Day with a virtual event that will showcase the island’s hydrogen projects.

The Hawaii Centre for Advanced Transportation Technologies (HCATT) and Hawaii State Energy Office (HSEO), in partnership with the Blue Planet Foundation and Indo-Pacific Command, will today host the event that will highlight Hawaii’s hydrogen efforts.

Although based in Canada, Ballard Power Systems is also celebrating National Hydrogen and Fuel Cell Day.

“There are now over 70 countries moving toward being zero-carbon by 2050. At Ballard, we believe in the potential of hydrogen and fuel cells to accelerate the energy transition to meet these goals,” the company said in a recent social post.

“Hydrogen is playing a unique and essential role in the transition to a clean energy economy. On this 6th National Hydrogen and Fuel Cell Day, Air Liquide is proud to be a world leader in the development of hydrogen infrastructure and technologies, especially here in the US,” he said.

“By increasing investment in the hydrogen economy, the US will benefit from game-changing technology for the transportation, power and industrials sectors, all while assuring continued energy system reliability, affordability and security.”

National Hydrogen and Fuel Cell Day to be held this week