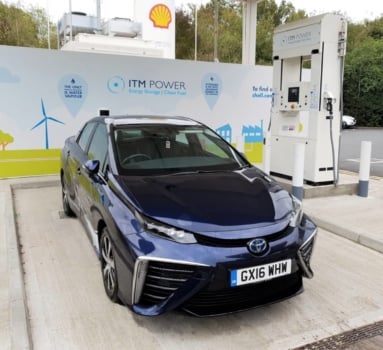 ITM Power has today opened its eighth hydrogen station in the UK at Gatwick Airport near London.

Located at the Shell services on the M23 corridor south of London, the new station is the second of two stations in the UK to be deployed as part of the pan-European H2ME2 project, which was funded by the Fuel Cells and Hydrogen Joint Undertaking (FCH JU) and the Office of Low Emission Vehicles.

The station uses electricity via a renewable energy contract and water to generate hydrogen on-site with no need for deliveries.

“It is always with pride that we see how FCH JU support helps to build up the necessary hydrogen infrastructure for the prompt mass deployment of fuel cell vehicles,” said Bart Biebuyck, Executive Director of the FCH JU.