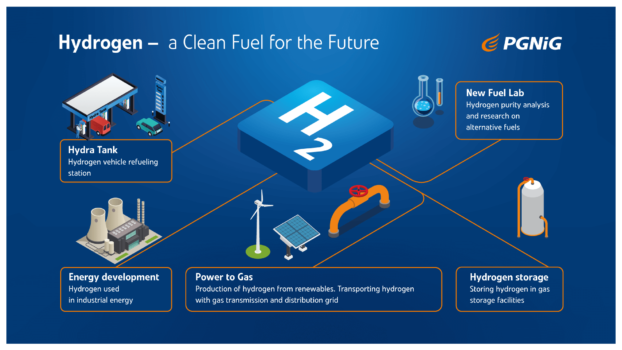 Through this programme the company is exploring the possibilities of storing and transmitting hydrogen through the gas network, and also has signed a contract for the design and construction of an experimental hydrogen station.

“By implementing the hydrogen projects in the pipeline, PGNiG will contribute to expanding the market for alternative fuels and thus will contribute to Poland’s fulfilment of EU climate policy goals,” said Jerzy Kwieciński, PGNiG President.

PGNiG said it plans to spend in excess of PLN 31m ($7.4m) on research under the new programme over the next four years.

The Hydra Tank project will build an experimental hydrogen station. PGNiG said it has already signed a contract with a consortium of Polish and UK-based companies to design and construct the station.

Expected to be launched in 2021, the facility will be located at ul. Prądzyńskiego in the Wola District of Warsaw, in the vicinity of the existing CNG (compressed natural gas) filling station.

“The initial period of operation will be a pilot test for PGNiG, combined with research work,” said Arkadiusz Sekściński, Vice-President of the PGNiG Management Board for Development.

“We want hydrogen to complement PGNiG’s existing range of fuels, including CNG and LNG, to drive advancement of gas mobility in Poland.”

PGNiG has started investigating the possibility of storing and transmitting hydrogen using the natural gas network.

A ‘green hydrogen’ production facility is to be built by the company’s branch in Odolanów under the InGrid – Power to Gas project. It is scheduled to come on stream in 2022.

PGNiG intends to use electricity generated by photovoltaic panels for the purpose of the project.

“The facility will allow us to test the entire process, from production to delivery of green hydrogen to customers,” said Sekściński.

“It will enable us to run tests consisting in injecting a proper mixture of natural gas and hydrogen into an on-site model gas network, storing hydrogen and carrying it by tanker to our station in Warsaw.”

The PGNiG Central Measurement and Testing Laboratory will expand its analytics capabilities to become the first laboratory in Poland and one of the few in Europe providing a hydrogen purity testing service.

Once it is accredited, the lab will test alternative fuels for PGNiG, also providing the testing service to third parties on a commercial basis.

“The new hydrogen programme is one example of PGNiG’s shift towards green energy. Over the next two to three years we want to create a coherent chain of hydrogen capabilities, enabling further growth in this field,” said Kwieciński.