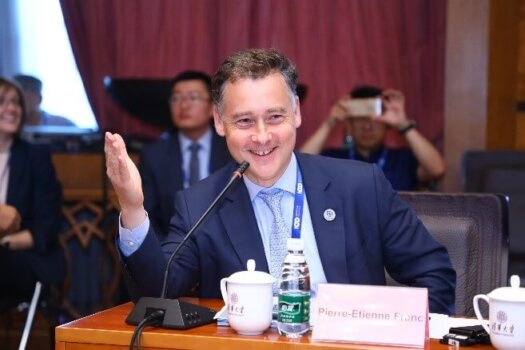 Pierre-Etienne Franc bets big on hydrogen; his investment fund FiveT Hydrogen is aiming to raise €1bn for the ‘disruptive’ technology by summer 2022

After 25 years with Air Liquide, Pierre-Etienne Franc made the bold move to leave the company this month and set out on his own in pursuit of what he says is his passion, hydrogen. Franc, former co-secretary of the Hydrogen Council, is now front and centre of the first pureplay clean hydrogen investment fund, FiveT Hydrogen, which is aiming to act as a catalyst in the scaling of the global hydrogen economy.

“In the end, my career was so much into hydrogen, almost more than into Air Liquide. And so it was a natural next move for me to try to bring the last piece of the puzzle that needs to be put in place for the hydrogen economy to work,” he told H2 View in an exclusive interview. “We all know it’s [hydrogen] a disruptive topic, and it’s a topic I’ve become progressively addicted to over the past 10 years.”

The FiveT Hydrogen Fund is aiming to raise €1bn ($1.2bn) for clean hydrogen infrastructure projects, and Franc is expecting to do this by the summer of next year.

“Now is the time to take action. It’s now because we’re moving into scale – the latest report from Mickinsey and the Hydrogen Council says there are around 228 projects up and running or ready to run, with a cumulative Capex spend of €300bn ($359bn). Maybe only 20% of those are mature, ready to really fly, but financial support will be needed. And so the Fund is exactly there to do that, to bring complementary funding schemes, project finance, minority partnership, and consolidation schemes to enable large players to take the risk to scale those projects, and to bet on the fact that when they are loaded they are very solid assets,” Franc said.