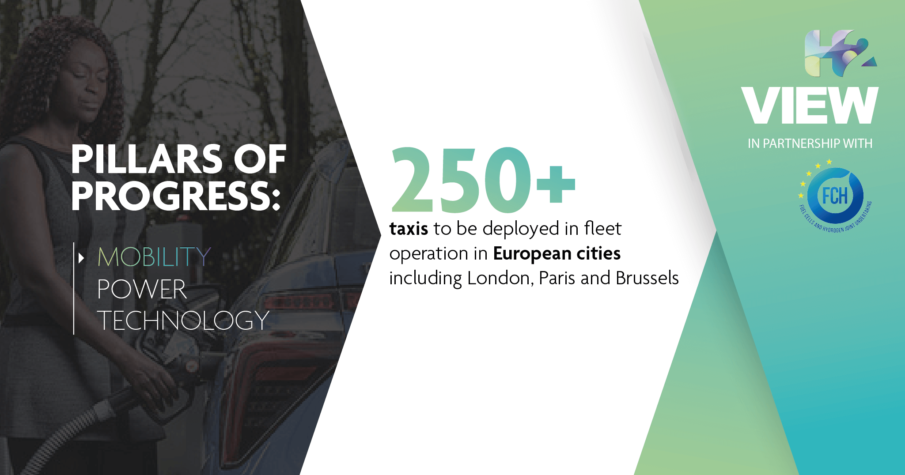 Powered by hydrogen, FCEVs have short refuelling times and the only emission they produce is water.

But the lack of hydrogen refuelling stations has discouraged captive fleet operators such as taxi companies from adopting them so far.

Since 2015, the Fuel Cells and Hydrogen Joint Undertaking (FCH JU) is working with industry leaders and municipal authorities to bring vehicles such as taxicabs and police vehicles onto Europe’s streets.

FCEVs have a vital role to play in European cities striving to reduce urban pollution.

The FCH JU is helping Paris, Copenhagen, The Hague, Bergen and London to adopt a new business model that incorporates FCEVs into taxicab fleets.

The fast refuelling times and longer ranges of FCEVs allow for a high intensity of usage which is not feasible with battery electric vehicles.

To date, these projects have resulted in more than 10 million kilometres driven and 1.17m kg of CO2 not emitted.

Held in demanding conditions, these projects’ demonstrations are raising awareness that hydrogen-powered vehicles are ready for widespread use.

FCEVs are matching both city expectations for improved air quality and commercial expectations from taxicab operators. And many more cities are interested in deploying hydrogen vehicles in taxi fleets, thanks to its superior advantages in terms of autonomy, fast refuelling and environmental benefits.

The future is clean

Hydrogen-fuelled taxicabs will lower CO2 emissions in European cities, reduce other forms of pollution and help to create and promote a circular economy.

The FCH JU has collaborated with industry operators and public authorities to ease the adoption of hydrogen-powered taxicabs in European cities.

The goal? To create a ‘complete package’ business model that encourages FCEV use in captive fleets such as taxicabs.

Some 210 FCEVs have be deployed in Paris, Copenhagen, The Hague, Bergen  and London in taxicab and municipal police fleets. Another 100 additional hydrogen taxis will be deployed in Europe.

Potential customers both captive leet operators and industrial vehicle owners are starting to realise that FCEVs are safe, reliable and practical.