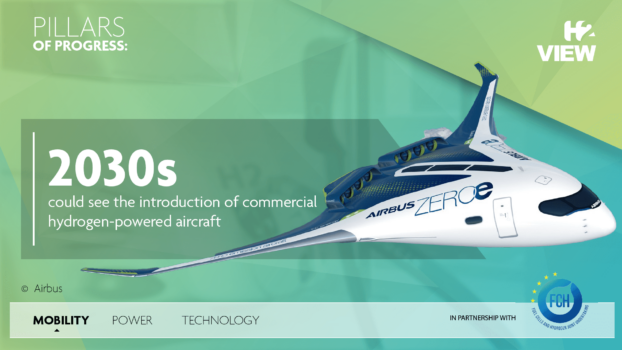 Pillars of Progress: Mobility – Hydrogen technology for cleaner skies from 2035

Hydrogen-powered commercial aircraft could come into service in just 15 years. The Fuel Cells and Hydrogen Joint Undertaking (FCH JU) has started the ball rolling with three research projects that will help reach this milestone.

Modern aircraft, powered by polluting kerosene, emit more than 900 million tonnes of CO2 globally each year, putting the aviation industry under intense pressure to decarbonise. Hydrogen, which can be produced sustainably using renewable energy, is emerging as a game-changing clean and viable solution, not just as an alternative to kerosene but also to synthetic fuels and biofuels.

Significant progress towards using hydrogen to power aircraft, is being achieved in a series of FCH JU-supported projects. HYCARUS developed a flight-ready fuel cell based auxiliary power unit system, including a high-pressure hydrogen tank, adequate for pressurised passenger aircrafts, while FLHySAFE is developing an emergency power unit for flight controls, linked hydraulics and flight-critical instrumentation in case of emergency. The HEAVEN project is producing a modular high-power fuel cell system for propulsion of a small aircraft, in combination with a cryogenic hydrogen storage system.