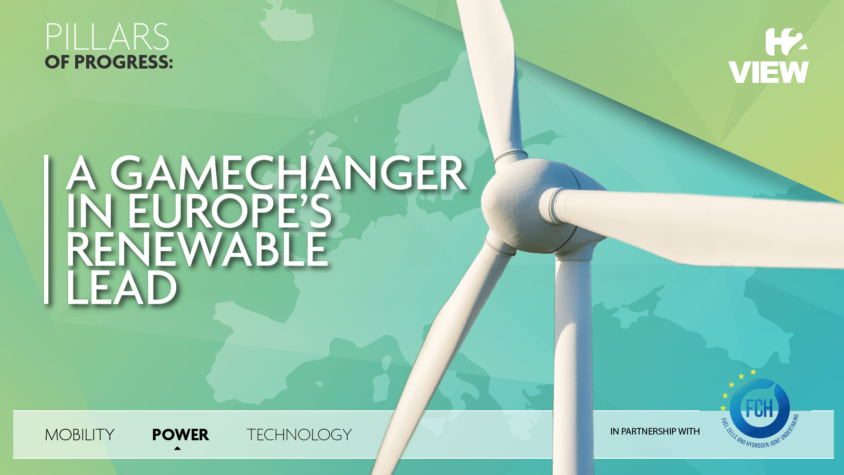 Pillars of Progress: Power – A gamechanger in Europe’s renewable lead

Electrolysers generate renewable hydrogen through a process whereby renewable electricity splits water into hydrogen and oxygen, to the benefit of the environment and fighting climate change through the indirect electrification of hard to abate sectors. The Fuel Cells and Hydrogen Joint Undertaking (FCH JU) is supporting the development of cutting-edge research projects in the field, turning Europe into a global leader in the field of renewable and clean energy technologies.

Alongside research into innovative renewable energy storage solutions, the FCH JU is moving Europe into pole position in electrolyser technologies.

Electrolyser technologies are key to the production of green hydrogen, paving the way for the greening of industry, transport and heating sectors through the increased penetration of renewable energy. Electrolysers are commercially available today, while the development of more efficient, more dynamic and cheaper electrolysers like proton exchange membrane (PEM) electrolysers or solid oxide (SO) electrolysers remains a challenge.

The FCH JU is taking a multi-pronged approach to promoting break-through solutions in low temperature PEM, alkaline and Anion Exchange Membrane and high temperature Solid Oxide electrolysis technology. It is supporting the development and demonstration of the largest innovative electrolysers worldwide while focusing on reducing costs and boosting performance. FCH JU-funded game-changer projects – like NEPTUNE, PRETZEL, GAMER and REFLEX – are now driving Europe’s global leadership in the field.

Europe is already a world leader in low temperature PEM and high temperature SO electrolysis, aiming to develop green hydrogen as a key energy carrier for the increased penetration of renewables in the EU’s energy transition. Europe has already published twice as many publications and patents on PEM electrolysis when compared with other regions of the world. Likewise, EU patent and publication leads are also significant in the field of solid oxide electrolysis development, a process in which an electrochemical device generates hydrogen utilising waste heat, thus achieving even higher efficiencies.

In light of the growing potential for renewable energy to combat climate change, electrolyser technologies must become more affordable, efficient and reliable before they can be rolled out on a large commercial scale.

FCH JU-supported projects are seeking to go beyond the current mix of state-of-the-art technologies for the commercial production of clean energy from electrolysers. By tackling issues currently limiting the full potential of electrolysers, the research is making a significant contribution to the EU’s transition to a low-carbon economy.

The goal? To ensure Europe continues to lead the world when it comes to innovative electrolysers and pushing the technology beyond current performance and costs.

Key results? The plan is to further increase capacity, safety and performance and drive down the cost of electrolysers.