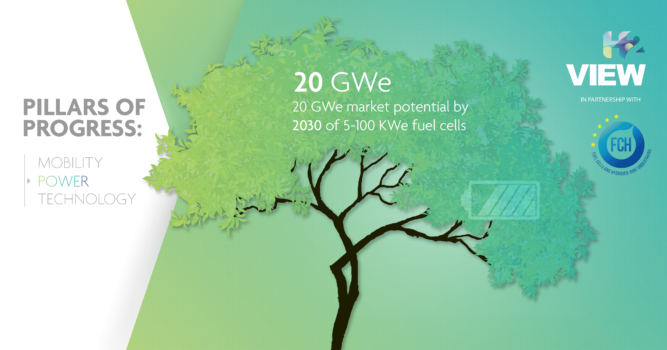 Fuel cell hydrogen technology can play an important role in greening the service and industry sectors in support of a circular economy.

Fuel Cell and Hydrogen Joint Undertaking (FCH JU) projects are developing innovative solutions for waste-to-energy conversion and to help the transition to a carbon neutral future.

The focus is now on scaling up the technology, improving performance and reducing costs, along with applying these solutions to meet circular economy goals through system-wide innovation.

The concept of a circular economy has gained significant prominence, becoming more widespread and pervasive over the last 10 years.

The FCH JU is also supporting projects in line with the circular economy as fuel cell technologies enable the production of clean energy from fuels resulting from waste treatment.

Fuel cells at the core of energy transition

The DEMOSOFC project is bringing into operation the largest biogas-fed fuel cell plant in Europe. The waste-water treatment process generates sludge, normally treated as a waste.

Thanks to the biological anaerobic digestion, sludge is turned into biogas comprising methane and carbon dioxide.

Most waste water in Europe and beyond is treated in facilities with a technical biogas potential below 500kWe.

Fuel cells offer much higher power conversion efficiencies and are also cleaner than conventional technologies as they do not rely on combustion.

The project also exemplifies the increasing range of fuel cell appliations, and their attractiveness within the service and small industry sectors.

Many applications, much potential

Supporting a first-of-its-kind installation, the FCH JU is showcasing the benefits of fuel cells in reducing pollution and carbon emissions.

The goal? To increase interest and scale up the technology while cutting costs.

Key results? The fuel cell plant generates zero emission energy as it is CO2 neutral and emits no contaminants into the air.

The replication potential for this type of installation is significant: it is estimated that 90% of the waste-water treatment plants in Europe could use the same technology.

In addition, this and other hydrogen fuel cell projects have led to the development of the next generation of the technology, which will be demonstrated in the later stages of DEMOSOFC.

The FCH JU has achieved a lot in the twelve years since its inception, as it strives to make hydrogen and fuel cell products an everyday reality.

Working in partnership with the FCH JU, H2 View is celebrating the organisation’s success stories in this ‘Pillars of Progress Series’ and bringing you, our readers, an exclusive article every fortnight.

Creating low-carbon and sustainable solutions, enabling market entry for new products, developing ‘next generation’ products based on previous research and opening new markets for European expertise in fuel cell and hydrogen technology are just some of the FCH JU’s success stories, as you will read about over the coming months.

Pillars of Progress: Taking CO2 out with the trash