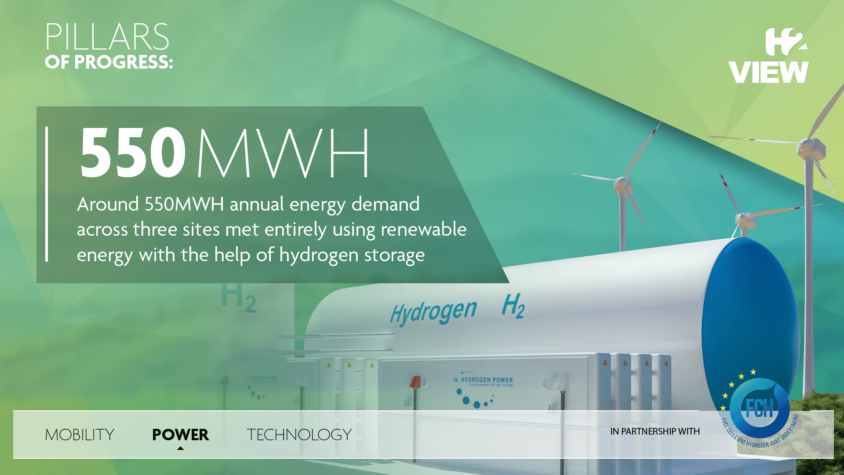 The deployment of intermittent energy sources, like wind and solar, requires a system for balancing supply and demand. For regions that are not part of a larger energy system, this can be particularly problematic. The Fuel Cells and Hydrogen Joint Undertaking (FCH JU) is demonstrating how flexible hydrogen technologies can offer an environmentally friendly solution.

Many remote regions cannot be adequately integrated into a larger energy grid and must use alternative systems for energy storage and distribution. This means that those using renewables often rely on fossil-fuel generators to balance supply and demand. Producing hydrogen is a cleaner alternative for storing excess energy.

Two major projects are exploring and demonstrating this route. In the remote region of Varanger, Norway, the FCH JU-funded Haeolus project is creating a new-generation electrolyser for installation inside the fence of a wind farm experiencing grid bottlenecks. A 2MW electrolyser has been installed, based on PEM technology, and is integrated with the wind farm, hydrogen storage and a smaller fuel cell for re-electrification.

To maximise relevance to wind farms across the EU and the world, the plant will be operated in multiple emulated configurations (energy storage, mini-grid, fuel production).

Like many large wind farms, especially offshore, Raggovidda is difficult to access, in particular in winter: Haeolus will therefore deploy a remote monitoring and control system allowing the system to operate without personnel on site. Maintenance requirements will be minimised by a specially developed diagnostic and prognostic system for the electrolyser and BoP systems.

Many of the world’s islands and other remote areas aren’t connected to a national power grid. Lacking reliable and inexpensive electricity, they rely on diesel generators or local renewable energy sources such as sunlight and wind. Although solar and wind energy are greener alternatives, they’re intermittent and supply often fails to meet demand.

A promising solution to this problem is bulk energy storage, in which hydrogen has a major advantage. Not only can it be produced from renewable energy, unlike electricity it can also be stored in large amounts for long periods of time. Aiming to demonstrate the feasibility of hydrogen-based energy storage in isolated microgrid areas, the REMOTE project has installed such a system in Agkistro, a small village in the regional unit of Serres.

The equipment consists of a hydrogen power-to-power system; an electrolyser that converts electricity into hydrogen (power-to-gas) and a fuel cell system that converts hydrogen stored in large quantities back to electricity (gas-to-power).

With the potential to compensate for fluctuations in renewable sources, hydrogen fuel cell technologies could enable the EU-wide replacement of fossil fuels. To advocate for this, the FCH JU is not only showing how these technologies can revolutionise energy systems in remote regions, but publicly presenting the business case for electrolysers in wind farms as a means to avoid electricity distribution fees.

The Haeolus project is exploring a number of operating strategies and creating a business case for hydrogen production that can be replicated in remote wind farms across the world.

By resolving energy-storage challenges in remote regions, the FCH JU is demonstrating key tools for stabilising the energy grid.

The goal? Bringing together hydrogen fuel cell product manufacturers, both small and large, with renewable energy suppliers, energy storage providers, researchers and regional authorities, to show that sustainable energy systems can be developed.

Key results? Demonstrating the use of hydrogen to create entirely sustainable energy systems based on renewables.