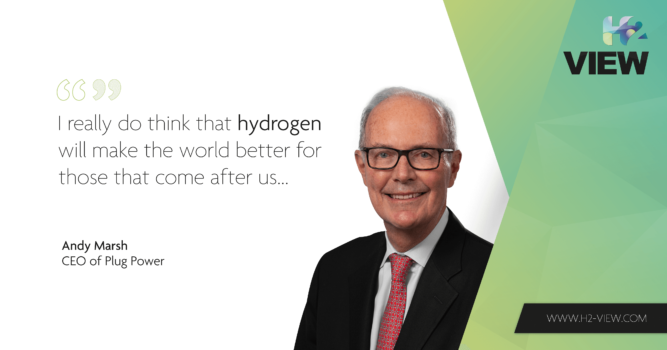 Plug Power: Stepping up during a global pandemic

“I can remember walking through the factory we had in New York and thinking to myself, how in the world am I going to fill this.”

Those are the words spoken by Andy Marsh, CEO of Plug Power, when he sat down with H2 View to discuss Plug Power’s journey, the company’s great successes and its recent acquisitions.

When Marsh first stepped foot through the factory doors twelve years ago, never did he imagine he would now be running a company that has delivered over 32,000 fuel cell units in an array of New York-based facilities for the likes of Walmart and Amazon.

Today, the company has broadened its technology capabilities and is the largest manufacturer of MEAs in North America, making over $300m in revenue and $20m in EBITA.

“When I joined, the company had a million dollars in commercial revenue. This year it is going to be three hundred times that. So, it’s really been a wonderful and fascinating journey,” he enthused.

Playing a major part of the company since 2012, Marsh has undoubtedly built up a passion for both hydrogen fuel cell technologies and pushing Plug Power to be a market leading company, in the US and globally.

“I become passionate about any job I do. When I was a dishwasher, I wanted to be the best dishwasher there could be, so this is very much the same.”

“However, my dad actually worked with fuel cells as well. Going back to the 60’s, he was involved in Project Gemini, NASA’s second human spaceflight programme.”

“Before I took the Plug Power job, I spend a great deal of time talking to people in the industry and potential customers to develop my knowledge, and I’ve got to say, the people I met then, and the people I work with today, they have a huge passion for hydrogen and that passion really is contagious.”

Like many industry experts working with hydrogen, throughout his time Marsh has recognised the crucial role the gas can play in decarbonising the planet whilst bettering a company’s abilities.

Offering zero-emission solutions to many global companies such as Amazon, Plug Power has enhanced company performance whilst improving the company’s carbon footprint.

“Over the last twelve years I think everyone has become more and more aware of our responsibilities to this planet and to combat climate change.”

“I really do think that hydrogen will make the world better for those that come after us and it is really important that we continue the work we are doing with companies to make the world a better place.”

Developing partnerships amidst a global pandemic

Whilst the coronavirus pandemic has sadly had a negative impact on a large number of companies across the globe, Plug Power stepped up to assist those companies who saw spikes in demand.

“When I think back to how we responded to coronavirus, I think we probably started preparations before a lot of other companies,” Marsh explained.

Like many of those who were deemed essential businesses during the pandemic, Plug Power had to rethink its operations in order to keep the safety of its employees the top priority.

That being said, when talking to Marsh, he expressed that even during a pandemic, business continuity was key if Plug Power is to achieve its five-year business plan that targets $1bn revenue by 2024.

“To achieve a five-year plan, you have to keep on track with revenue and margin. During this time, our people, especially our factory and service people, have been working exceptionally during this crisis.”

During the peak of coronavirus, Plug Power worked with Walmart and Amazon closely due to the companies experiencing increased demand for products.

“There were days during the pandemic where we were helping Walmart and Amazon move 30% more goods than they would usually move during the Christmas period.”

Whilst speaking to Marsh, he also shared that when using Plug Power products, Amazon said they were also able to move goods 10% faster than when using other methods.

“The ability to support them during these really critical times has really helped us to secure more orders for this year, and because of that, we are now well on track for our five-year plan.”

Over the course of the pandemic, Plug Power employees were active in 80-90 distribution center to ensure its customers could be successful in supplying those in need.

“If it wasn’t for our folks in the service business, or our folks manufacturing the projects, the headline successes really would not have been possible.”

“I think the crisis really reminded us all just how important communities are.”

Following on from its coronavirus efforts, at the end of June Plug Power confirmed the completion of the United Hydrogen acquisition that was first announced back in May.

H2 View took the opportunity to talk to Marsh about the acquisition and how it will enhance Plug Power moving forward, as it aims to have more than 50% of its hydrogen sold to customers as green hydrogen.

“To accomplish this goal, we really needed to acquire companies that have the technology to produce green hydrogen today.”

“We have actually known the folks at United Hydrogen for about five or six years now. In fact, every acquisition at Plug Power that I have been involved in has been based on a long-term partnership.”

With hydrogen generation taking place in Tennessee, Plug Power’s United Hydrogen business is the first non-traditional industrial gas company to build a hydrogen plant, something that really impressed Plug Power when in discussions leading up to the acquisition.

“So, they bring the ability of knowing how to build a plant, they know how to generate hydrogen at scale, and they know how to liquefy hydrogen, something that I think is not fully appreciated.”

“On top of that, they also bring logistics capabilities, so if you couple that with our other acquisition of Giner ELX, an electrolyzer company, we have all the ingredients.”

In addition to its goal of 50% of its hydrogen being green hydrogen, Plug Power also hopes that the two completed acquisitions will help it achieve its plan to increase its hydrogen demand to over 85 tons of hydrogen a day by 2024 – another aspect of its five-year plan.

Speaking of the goal, Marsh explained, “By the end of this year, we will almost be halfway to that usage level and our customers will be using close to 40 tonnes per day.”

“A good deal of it has to do with our growth in the material handling sector which encompasses customers like Amazon and Walmart. The customer demand is there, so we will do it.”

Staying unique in a competitive market

Before finishing up the in-depth talk with Marsh, H2 View took the opportunity to ask the industry veteran what he thinks makes Plug Power stand out in such a competitive market.

“I already gave you my dishwasher story. But I also worked in a hotel as a front desk clerk and in that experience, when you have to deal with customers at two or three o’clock in the morning, you have to become incredibly customer focused.”

“I brought that culture to Plug Power and I think another thing that is very different to other companies in this space is that I never view any of our activities as a science experiment.”

“We want to give customers the products they want, and we want to make them unique to better their business.”

“I think the way we come up with turnkey end-to-end solutions for people like Walmart and Amazon, and the way we stand behind our products uniquely positions us.”

“It is a competitive market, but we provide system solutions with a passion for customers in an entrepreneurial fashion; I think that uniquely differentiates Plug Power.”