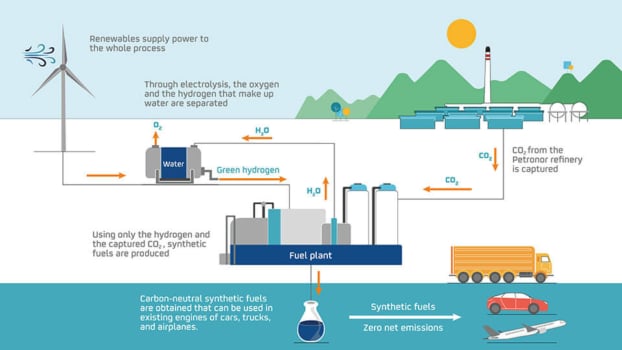 Spanish oil major Repsol has today revealed plans to build one of the largest net zero emissions synthetic fuel production plants in the world, based on green hydrogen generated with renewable energy.

The facility, which will be fully operational within four years, will set a new benchmark in Europe thanks to the cutting-edge technology applied and the use of CO2 captured in the nearby Petronor refinery.

Its development represents a first-order technological challenge that will be led by the Repsol Technology Lab research centre.

It will combine green hydrogen – a 100% clean energy generated from renewable sources –with CO2 as the raw materials in the process, and it will position Repsol on the leading edge of the development of net zero emissions fuels.

In the first phase, which will be scalable in a later commercial stage depending on the results obtained, 50 barrels of synthetic fuel will be produced per day, with net zero emissions of CO2 in the entire production cycle. Conceptual engineering will begin this year.

Petronor is the only refinery in the Iberian Peninsula and one of few in Europe that has integrated the process of capture, storage, and use of CO2, and it is expected to be able to capture the CO2 directly from the air.

“Spain must base its decarbonization strategy on its technological and industrial capabilities,” said Josu Jon Imaz, CEO of Repsol.

“The production of green hydrogen in combination with the capture and use of CO2 to produce net zero emission fuels is part of the industrial decarbonisation strategy of Repsol.”

“With this project, the Spanish industry is positioning itself to become a leading European player in reducing emissions.”