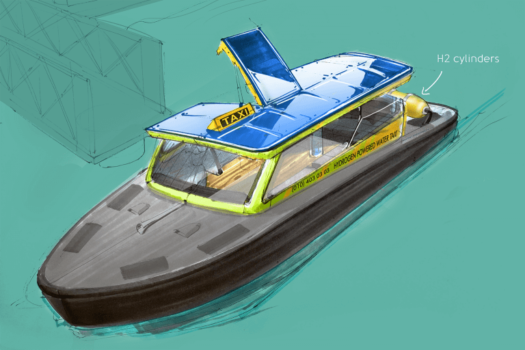 It’s well known that the best way to navigate Rotterdam, the second largest city in the Netherlands, is by water taxi, and these fast black-yellow coloured speed boats will soon be powered by green hydrogen.

A consortium led by Enviu is developing a hydrogen-powered water taxi for the iconic Watertaxi Rotterdam’s fleet, which is expected to be operational in 2021.

Greenhouse gas emissions, and the resulting global warming, are one of the biggest problem’s society faces today.

According to Enviu, if the maritime industry were a country, it would be among the top six producers of greenhouse gas emissions globally, with waterborne transport accounting for more than 3% of global emissions and 10% of all transport emissions.

Together the SWIM consortium, consisting of Enviu, Watertaxi Rotterdam and maritime innovation companies Flying Fish and ZEPP.solutions, are designing, developing and integrating proven hydrogen technologies into a brand new boat.

A fuel cell-based system is planned to be ready in 2020, which will then be integrated into the water taxi.

The boat’s efficiency is going to be optimised to fully capitalise the advantages of operating on electric propulsion by fuel cells from hydrogen.

Enviu said the aim is that the boat’s performance will meet or exceed the performance of its peer boats, allowing it to be fully embedded into their operational schedule.

“We are going to demonstrate that green hydrogen can already be used operationally in the maritime sector,” sais Tim van Vrijaldenhoven, who coordinates the SWIM project from Enviu’s shipping program THRUST.

“Previous attempts worked technically, but were not market-ready because of a lack of infrastructure.”

“To overcome this barrier, in parallel to this project, Enviu is working on developing a green hydrogen tank station that can service the water taxi, but also other customers.”

“This station would be an energy hub that can be accessed from land and water, strengthening its business case.”