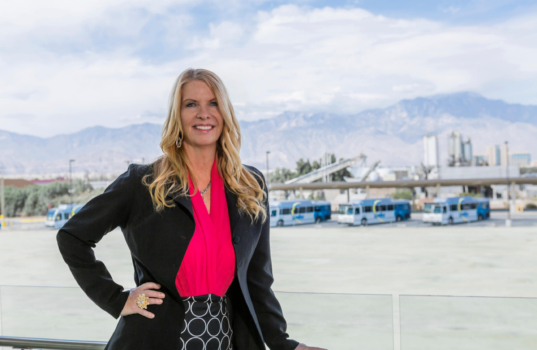 The progressive and passionate alternative fuels supporter currently has 17 hydrogen fuel cell buses and four all-battery-electric within its fleet, with a further eight fuel cell buses on the way.

“We’re technology agnostic,” SunLine’s CEO and General Manager Lauren Skiver enthuses. “We’ve developed a plan to go completely hydrogen by 2035. When I say completely, we’ll probably still have about 18 battery-electric buses in there. But the reason for that is when you’re scaling up hydrogen, you need to be able to pace the production side to the bus side. The production side is expensive.”

To keep costs down, SunLine has invested in its own hydrogen refuelling infrastructure and makes its own fuel for roughly $8 per kg. Skiver tells H2 View that if she had to buy hydrogen fuel on the open market, it would cost roughly $30 per kg, which might explain why the agency is only one of a few in California using fuel cell buses.