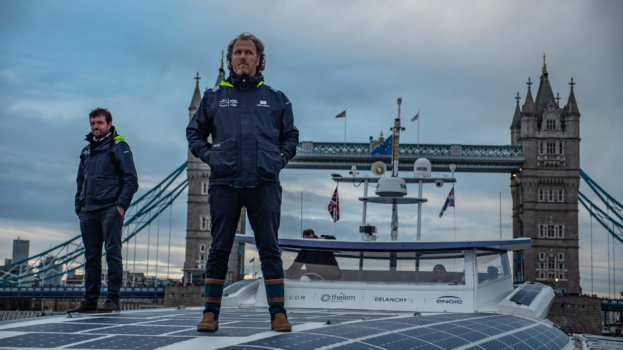 Energy Observer’s Captain and Expedition Leader, Victorien Erussard and Jérôme Delafosse, have been selected to carry the Olympic flame – set to be powered by hydrogen for the first time in the international sporting events history – in Tokyo this summer.

The news was announced today at Energy Observer’s annual press conference in Paris, France, where the team behind the world’s first self-sufficient seagoing vessel powered by hydrogen revealed the boat will journey to Tokyo for the Olympic Games as part of its 2020 programme.

In what will be a powerful and meaningful stopover for Energy Observer, the vessel will arrive in Tokyo in time for the Olympic Games’ Opening Ceremony on Friday 24th July, and after making its first Pacific crossing.

Read more: An Odyssey for the future: Where Energy Observer will be in 2020

After spending just over three weeks in Tokyo, the reconditioned former 30.5 metre legendary racing catamaran will launch into a second Pacific crossing, bound for California, a pioneering state in North America’s ecological revolution, with stopovers in San Francisco, Los Angeles and San Diego.

This 2020 programme will see Energy Observer cover 20,000 miles (37,000km), which roughly equates to the distances of a journey around the whole world.

Since October 2019, Energy Observer has been undergoing a fourth optimisation refit, which its team said has been the richest in terms of onboard innovations.

New technologies installed to take on the long crossings that await her include:

Energy Observer’s first phase – a three-year European odyssey spanning 2017 to 2019 – enabled the onboard technologies to be tested, enhanced and validated to be in a position to deploy them on a large scale.

It also made it possible to give concrete expression to the mission of the primary French Ambassador for the Sustainable Development Goals: going out to meet pioneers who are committed to transforming the world with solutions, which are reinventing energy, agriculture, economy and inclusiveness, while protecting biodiversity and demonstrating that another future is possible.

Energy Observer’s team is proud to begin this second phase of the odyssey to new continents, which will shine a light on all the diversity and richness of the many local solutions that have a global impact.

Today, more than just a boat, Energy Observer is keen to give the technology meaning and in so doing actively be a part of the rolling out of alternative solutions.

Energy Observer is positioning itself as a committed protagonist, as well as an accelerator of energy and ecological transition, helping to contribute to a cleaner, fairer and more harmonious world.