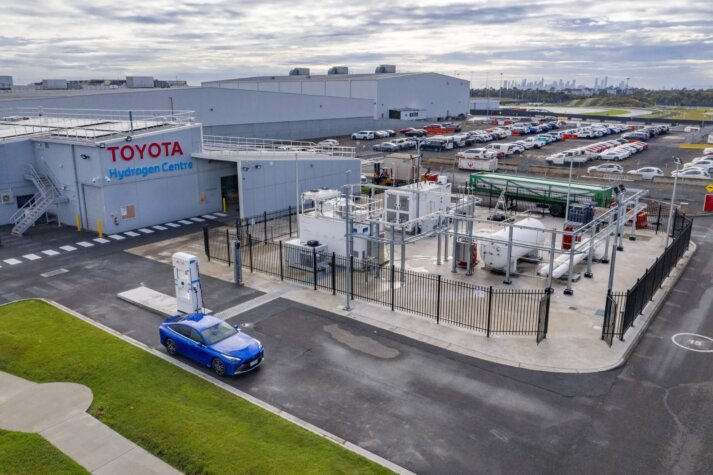 In a Victorian first, Toyota today (29th March) unveiled a new AUS$7.4m ($5.67m) hydrogen centre in Altona which will pave the way for the Japanese car giant’s hydrogen-powered Mirai to enter the Australian market.

Located at Toyota’s former manufacturing site in Altona, west of Melbourne, the Toyota Hydrogen Centre comprises Victoria’s first commercial-grade, permanent hydrogen production, storage and refuelling facility, as well as an education centre that will provide information on how hydrogen fuel cells work and the benefits to society, helping to dispel any myths around the safety and use of hydrogen as a fuel.

Hydrogen is produced on site by a 200kW electrolyser that uses electricity to split water into hydrogen and oxygen components, and has the capacity to produce up to 80kg of hydrogen per day.

Power for the electrolyser is drawn from a combination of an 87kW solar array, a 100kW battery storage, and mains grid, depending on what’s available at the time.

The hydrogen is then stored in a bank of storage tubes at medium and high pressure to be able to refuel both the fuel cell forklifts that Toyota uses in other parts of the Altona complex and hydrogen FCEVs, like the new Mirai FCEV.

Toyota said its Toyota Hydrogen Centre is an “important step” in addressing this challenge.

Toyota Australia President and CEO Matthew Callachor said the Toyota Hydrogen Centre was built to showcase the benefits of hydrogen fuel cell technology as part of its commitment to developing sustainable technologies for future mobility and energy needs.

Callachor said, “Globally, Toyota is committed to achieving zero CO2 emissions from its vehicles and plants under the Toyota Environmental Challenge 2050 and the commissioning of our hydrogen refuelling facility here today is an important step towards achieving that goal.”

“By demonstrating the viability of renewably-produced hydrogen as an automotive and energy fuel through this project, Toyota and its partners in government and business are pioneering a cleaner, more sustainable future that will encourage the further acceptance of this technology.”

It is capable of filling a Toyota Mirai hydrogen fuel cell electric car in approximately three minutes, and can also be used to dispense hydrogen to buses and forklifts.

John Evans, Managing Director of BOC South Pacific, said the completion of the Toyota Hydrogen Centre was a significant milestone that would advance hydrogen mobility in Victoria and support Toyota’s ambition for zero emissions from its sites by 2050.

“This hydrogen refuelling station will help build community confidence and understanding of this emerging fuel, with Toyota playing an important role in educating the public about how hydrogen can play a significant role in transport and the broader energy supply chain,” Evans said.

“BOC is committed to working with industry and government to build hydrogen mobility demand particularly in metropolitan locations, which will help stimulate more investment in hydrogen production and refuelling stations across Australia.”