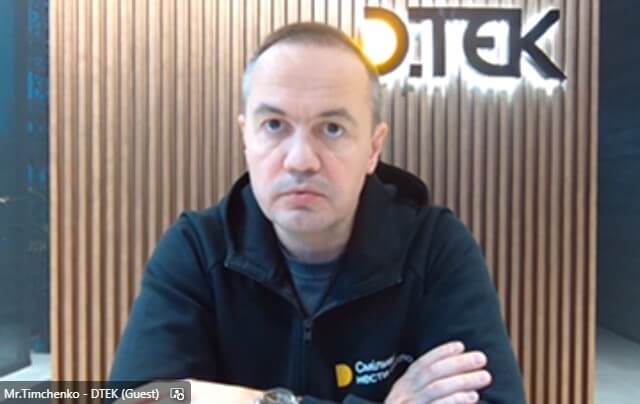 Every country is having to plan for the energy transition – even those in the midst of a devastating war.

Maksym Timchenko, CEO of DTEK, today provided an operations update and responded to a question about Ukraine’s future renewables strategy.

“We all have to be prepared for the moment when war is over, and start thinking about this future now,” he said. “In this context, we brought an initiative, ’30 by 2030′ – having 30GW of renewable capacity in our generation mix. It would be about half of our generation capacity in Ukraine, if we can bring it to light. Half of the 30GW could be exported to European countries, either through green hydrogen or electricity.”

He said it could develop up to 800MW wind capacity in central and western Ukraine, and introduce more solar farms. “Ukraine is very well placed, and we can build more renewables capacity throughout Ukraine and the electrolysers and equipment next to the generation capacities.”

The EU Hydrogen Strategy sets an ambitious vision for 40GW of electrolyser capacity within Europe by 2030 to produce green hydrogen, plus an additional 40GW electrolyser capacity in the southern and eastern neighbourhoods of Europe (e.g. Ukraine or Morocco) from which Europe could import renewable hydrogen.

Ukraine also has one of the largest gas transportation systems, which gives it an edge for future hydrogen shipments to Europe. But its grid requires major investment, since it mostly dates back to Soviet times.

“This is our vision of the Ukrainian energy sector by 2030, with Ukraine becoming the main exporter of clean energy to the EU and making a significant contribution to Europe’s post-war energy security system,” said Timchenko.

“To make that happen, we need support. That is why we are appealing to international companies to join the coalition of the willing to help us build back greener. Any restoration and recovery process in Ukraine’s energy must have a European perspective and should be based on new green power generation, accelerating energy transition across the EU.

“We have no doubt that Ukraine can become a significant leader in the decarbonisation of Europe’s energy. It is an important reason why winning this war matters so much for Ukraine and for Europe.”

The war in Ukraine has spurred $73bn of fresh public and private investment in green hydrogen as falling costs have made fossil fuel-produced hydrogen uneconomic as gas prices soar, according to a Carbon Tracker report. As a result of higher gas-feed prices, $100bn of ‘dirty’ hydrogen assets may become stranded by 2030, the Clean Hydrogen’s Place in the Energy Transition report found.

Since the start of the conflict natural gas prices, a major feedstock for producing fossil fuel-produced hydrogen (blue and grey), has soared by more than 70% on international markets triggering an energy crisis and pushing lawmakers worldwide to urgently source alternative sources of fuel.

Starting October 10, DTEK facilities have undergone over 170 attacks by missiles, kamikaze drones, and rockets. Russian attacks damaged more than 11 000 pieces of DTEK’s thermal power plants’ equipment, and around 5-6m people in Ukraine are cut off from electricity daily.

“Russia changed their tactics – initially they targeted power grids and substations. From this year, it’s specifically targeting thermal power generation. Two of the six power stations have been damaged, one we can’t reconnect, and the other has lost about 40% of capacity.”

Amid all the current challenges, planning for next winter is also a priority. “We need significant investments, in hundreds of millions of dollars,” he said. “What’s extremely important for us, and other private players, is that funds can be unblocked.”