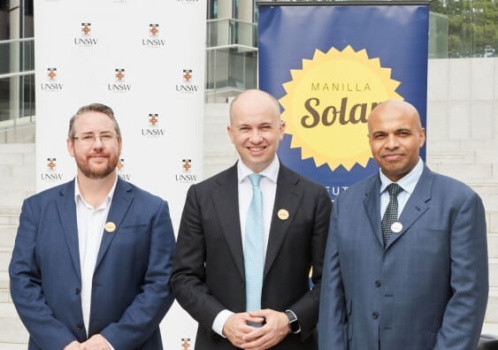 UNSW hydrogen tech to be used in world-first application

Hydrogen technology developed at the University of New South Wales (UNSW) Sydney will be installed in a world-first application of its kind in the regional town Manilla, thanks to New South Wales (NSW) government funding announced today.

The funding is designed to help regional communities in NSW take control of their energy bills and benefit from the economic opportunities presented by changes in our energy system.

A $3.5m grant has been awarded to the Manilla Solar Project, a partnership between Manilla Community Renewable Energy Inc. and Providence Asset Group.

The project will use an advanced hybrid battery storage system called H2Store, which was developed at UNSW by Professor Kondo-Francois Aguey-Zinsou and his team at the School of Chemical Engineering.

“It’s an effective way to store and generate renewable energy, mitigate the fluctuation of renewable generation and increase confidence in the security of supply.”

Solid state hydrogen technology will be installed to store hydrogen in 20-foot containers with an energy density of 17MWh.

This will be located at the community solar farm at Manilla, near Tamworth, and will be a first of this kind in the world in terms of scale, according to UNSW.

The project is expected to provide a model for sustainable energy that can be replicated by other communities.

Manilla residents are set to benefit, with the opportunity to buy solar electricity at a competitive price.

“This initiative will also provide the community with the means to store solar energy and sell it on the electricity market during peak demand when the sun doesn’t shine,” Professor Aguey-Zinsou said.

“I am very excited to see the technology we developed in the lab here at UNSW scaled up and used in real-world applications.”

‘It will prove the feasibility of hydrogen storage at scale and position Australia to become a major player in transitioning to renewable energy.”

Construction will commence on the Manilla Solar Project in the latter half of 2020 and is expected to be operational early 2021.The storage component will be installed during 2021.