The Cummins HyLYZER in Bécancour, Quebec, Canada, is the largest proton exchange membrane (PEM) electrolyser in operation in the world. A new video case study highlights the installation’s ground-breaking green hydrogen production capabilities, making it a beacon for a zero-carbon future.

Through a phased ramp up, the Cummins HyLYZER system is now at full operation and can produce up to 8.2 tonnes of low-carbon hydrogen per day — or nearly 3,000 tonnes of hydrogen annually. It’s powered by the region’s electric grid, which is largely supplied by renewable hydro-electric power. This means the hydrogen produced at the plant is “green” and almost entirely carbon-free.

Through this green hydrogen production, the facility is preventing approximately 27,000 tonnes of CO2 emissions per year. This is equivalent to taking 10,000 fossil-fueled cars off the road.

Since its commissioning, the system in Bécancour has increased Air Liquide’s hydrogen production capacity by 50%, allowing them to respond to the growing demand for low-carbon fuel in the North American market for both industrial and mobility purposes. 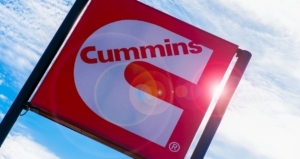 From being one of the first in its industry to publish a sustainability report to being front and centre of the hydrogen movement today, Cummins a global technology leader steeped in environmental consciousness and solutions.

For over a century, Cummins has been designing, manufacturing, distributing and servicing a broad portfolio of power solutions, from diesel, natural gas, hybrid, electric, and fuel cell powertrains, to powertrain components and now electrolysers for hydrogen generation. Its products cover many different market segments, including buses, trucks, marine, mining, agriculture and power generation.

Hydrogen power is at the forefront of that portfolio today, particularly so since the acquisition of Hydrogenics in 2019, and builds on a focus on sustainability that has endured for many years already. Cummins is one of many high-profile members of the Hydrogen Council and Amy Adams, Vice-President of Fuel Cell & Hydrogen Technologies at Cummins, told H2 View in an exclusive interview, “We are a 101-year old company and since our founding, Cummins has always been at the forefront of social justice, environmental sustainability and technology development. We are very comfortable driving change to push forward issues we care about.”

Heavy-duty trucks could be the earliest adopters of hydrogen ICEs, says Cummins