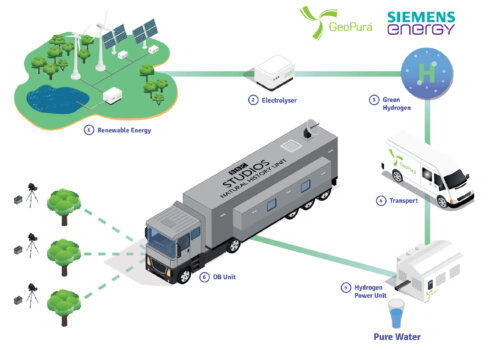 An entire episode of BBC Studios Natural History Unit’s Winterwatch was powered by a hydrogen power unit and energy saving batteries last night (26th Jan), making TV history in the UK as the world’s first large-scale outside broadcast unit to be powered by green hydrogen.

The milestone achievement announced today (27th Jan) is the result of a partnership between GeoPura™ and Siemens Energy, which are supplying continuous uninterrupted, emissions free, critical electrical power to BBC Bristol’s outside broadcast unit with a GeoPura™ 250kW hydrogen power unit.

With the unit, GeoPura and Siemens hope to power the Winterwatch programme for a whole two weeks, setting a new standard for broadcasters around the world, demonstrating how uninterrupted critic al power needed to keep live TV production facilities rolling can be delivered without damaging emissions.