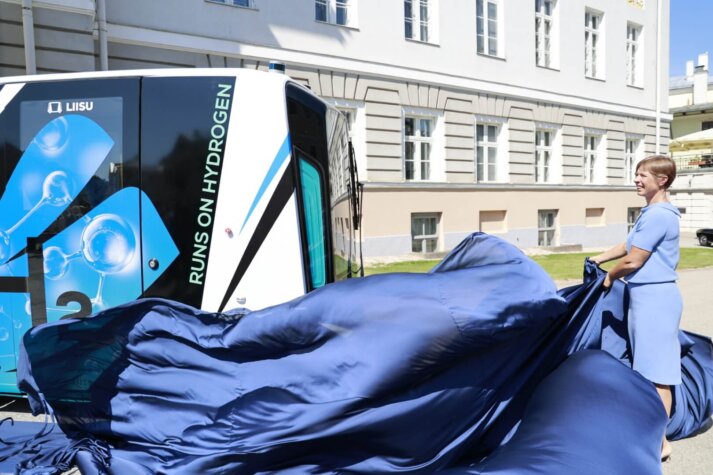 The President of the Republic of Estonia on Monday (July 5) was the first passenger on what is believed to be the world’s first hydrogen-powered autonomous vehicle, developed by Auve Tech and the University of Tartu.

Powering the development is low-temperature hydrogen cells, developed at the University of Tartu, which produce energy from hydrogen right inside the self-driving shuttle.

Like Auve Tech’s other vehicles, the shuttle can drive without human interference both in public traffic and semi-closed areas; its movements can be monitored and, if necessary, corrected by remote control.

At the premiere of the vehicle at the University of Tartu, the President of the Republic of Estonia Kersti Kaljulaid held a speech in which said the development is not only an important milestone in the integration of two promising future technologies, but also marks a major step towards the new reality.

“No one in the world has dared to spend time and resources on bringing together two parallel developments in transport – autonomous driving and remote control with hydrogen fuel. This shows that both technologies are still in an experimental stage,” she said.

“Undeniably, an entrepreneur who combines these two things takes a risk that is not twice but two squared as big. We actually don’t know what exactly our future will be and how soon it will be here. Like always, the problem is not in science or technology, but in the human being.

“We cannot imagine what happens when we have two types of drivers in traffic. It is possible that we, the Homo sapiens, must step away from the steering wheel to make room for self-driving vehicles. Over 30 years, Estonians have done a lot of things that others have said they would, but do not dare to do. In this sense, Auve Tech’s hydrogen car fits perfectly into the worldview of Estonians,”

According to CEO of Auve Tech, Johannes Mossov, a driverless hydrogen vehicle is an environmentally friendly alternative to personal cars. “The hydrogen used in the hydrogen cell makes it possible to produce the electricity needed to run the vehicle inside the vehicle, and the only by-products are vaporised water and heat,” Mossov said.

“It’s fast charging compared to electric cars allows more working hours for the vehicle, increasing the efficiency and introducing a way to integrate autonomous transportation to our everyday lives.”