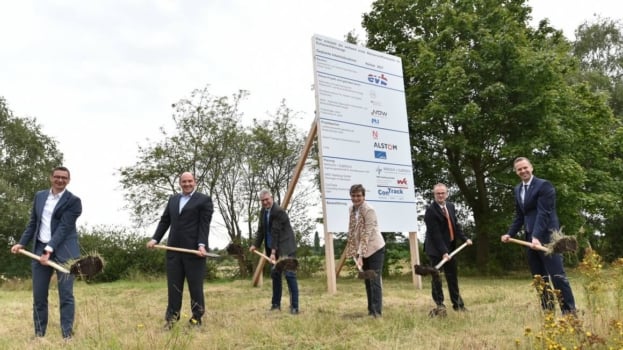 A groundbreaking ceremony has been held in Bremervörde, Germany for the “world’s first” hydrogen station for passenger trains.

Construction is due to start in September and follows a successful 18-month trial of the world’s first two hydrogen trains in the region.

Linde will build and operate the station on behalf of the Lower Saxony Regional Transport Company (LNVG).

The station, expected to be operational in early 2022, will fuel 14 of Alstom’s hydrogen-powered Coradia iLint’s, which will be supplied to the regional rail traffic provider LNVG, and will use the network of regional railway company EVB.

It will be constructed with scope for future on-site hydrogen generation using electrolysis.

“The introduction of hydrogen as a fuel for trains will significantly reduce the burden on the environment, as one kilogram of hydrogen replaces approximately 4.5 litres of diesel fuel,” said Mathias Kranz, responsible for the onsite and bulk business at Linde in Germany.

“The construction of the hydrogen filling station in Bremervörde will create the basis for the series operation of our emission-free hydrogen trains in the Weser-Elbe network,” said Jörg Nikutta, Managing Director Germany and Austria of Alstom.

“We are proud that we were the first railway company in the world with permission to operate fuel cell trains on the Weser-Elbe network,” said Andreas Wagner, Head of the SPNV division and authorized signatory of the Eisenbahnen und Verkehrsbetriebe Elbe-Weser GmbH (evb).

“Our passengers were very curious about the trains and their technology from the very beginning.”

“In addition to the very low noise level, the hydrogen train impresses with its zero emissions, especially in times of climate change. For our train drivers, the operation of iLint was a very special motivation.”