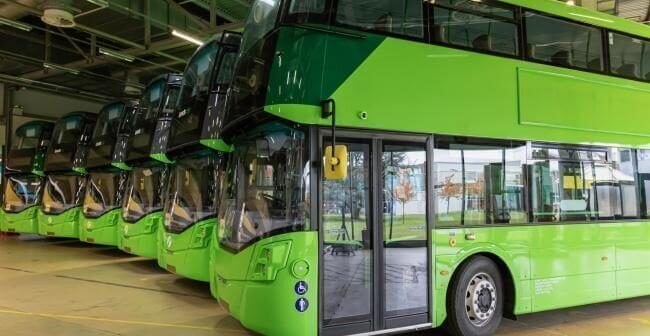 Wrightbus’ hydrogen-powered double decker bus, believed to be a world first, is set to be showcased at the government-hosted Global Investment Summit which recognises the “best” of UK innovation and green technology.

Hosted by the Prime Minister and supported by members of the Royal Family, the summit hopes to demonstrate Britain’s commitment to green industries, ahead of COP26, and drive billions of pounds of investment across the UK.

“Thanks to investment into research and development, Wrightbus has become a true world-leader in zero-emission bus transport technology. From the launch of the world’s first hydrogen double deck bus to the launch of the fastest-charging electric vehicle double deck on the market, our innovation in the sector is unsurpassed.

“To date, our zero-carbon buses have covered more than half a million miles, preventing almost one million kgs of CO2 from entering the atmosphere on those journeys. We need to ensure hydrogen-powered transportation is a viable and cost-effective alternative for the UK to hit its net zero objectives.”

Around 200 investors are set to attend the event, with the presented technology to have a key role in presenting the Prime Minister’s Ten Point Place, through which hydrogen will play a key role.

Unveiled in November last year (2020), the plan includes moves to boost hydrogen production, with the promise of a town heated entirely by hydrogen by the end of the decade.

Johnson said the blueprint promises a multi-billion package of investment across the green economy designed to create and support up to 250,000 new jobs, whilst making strides towards net zero by 2050.

On Wrightbus’ involvement here, Bamford continued, “We’re proud to be part of the movement that’s leading the world to create technological solutions to ensure a net zero future, whilst also creating green jobs and boosting the UK’s green economy.

“As a nation, we could create a world-leading hydrogen ecosystem allowing us to become one of the best hydrogen-producing countries in the world – but continued investment into the sector is vital for such projects to have a truly global impact.”