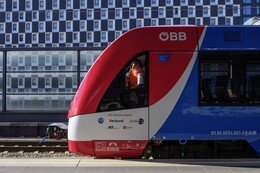 Austria has become the second country in Europe to fully approve Alstom’s hydrogen-powered Coradia iLint train as an emission-free alternative to diesel units.

“We are immensely proud to confirm that the Coradia iLint has proven that it is suitable for all service routes – even on steep sections its performance is convincing. Not to mention our pride in the fact that the train has now received official approval in Austria,” said Gian Luca Erbacci, Senior Vice-President of Alstom Europe.