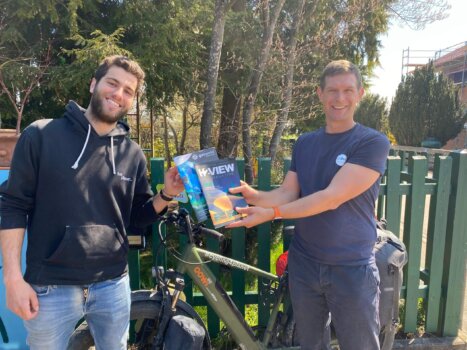 Pictured is Antoine Abou and Stephen B. Harrison

By Stephen B. Harrison on May 11, 2021
Translate
News Mobility

Six months ago, Antoine Abou set off from Lyon in France on a 10,000 km bike tour to interview players in the hydrogen value chain. After 6,000km, he took a pause to spend two days in the company of Stephen B. Harrison, Managing Director at sbh4 consulting and an Editorial Advisory Board Member at H2 View.

“The time I have spent in Gelting with Steve and his family has been incredible,” said Abou. “We have shared food, laughter and insights into the hydrogen economy. On Wednesday he invited me to join a three hour training session on blue hydrogen production with 11 other international participants and I learned so much.”

Abou was also delighted to have received a major sponsorship donation from sbh4 GmbH which will ensure that he has enough funds to continue his adventure through Austria, Italy and through North Africa. Renewable solar power in north Africa is likely to be a key input to green hydrogen production as an energy export to Europe through the European Backbone hydrogen pipeline in the future.

“I have interviewed 170 C-level players in the European hydrogen economy,” confirmed Abou. “From France to Belgium, Norway, Sweden, Denmark and now in Germany. I also talk with members of the public and ask them what they know about hydrogen. The answers range from: ‘hydrogen is the future’, through ‘I know nothing about hydrogen’ to ‘hydrogen is dangerous’… there is clearly a lot of work to do to raise awareness of hydrogen and assure people that it is a viable and safe part of our future.”