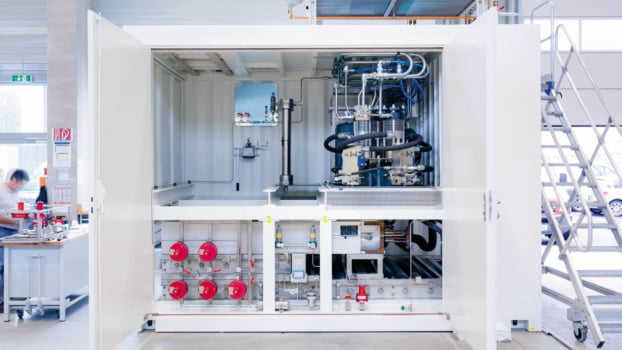 Going green in Germany with hydrogen as a transportation fuel

Driving in Germany is perhaps best known for the absence of speed restrictions on parts of the German Autobahn network. And German car makers are renowned for their top-tier luxury brands. More recently, there has been another good reason to pay attention to the German road transport sector: the way it is embracing hydrogen mobility.

At now 82 hydrogen filling stations in operation at the time of writing, the German network sits up there alongside the Japanese and Californian systems as a beacon that will light the way to lower transportation emissions. No other European country can boast a similar network and approximately two thirds of Europe’s hydrogen filling stations are in Germany. However, when it comes to hydrogen fuelled cars, the story is different.

Japanese and South Korean car makers Toyota and Hyundai lead the league table when it comes to sales of fuel cell hydrogen-powered production models with their Mirai and Nexon cars. Hyundai’s monthly fuel cell electric vehicle (FCEV) sales regularly top 3,000 units and Toyota also regularly sells more than 2,000 hydrogen-powered cars each month. Whilst the Asians clearly lead here, the German auto industry is also innovating in this direction. The unveiling of the Mercedes GLC F-Cell at the Frankfurt Motor Show in September 2017 was a key milestone for the European luxury brand. Two years later, BMW revealed its pre-production BMW iHydrogen Next, also at the Frankfurt Motor Show.

Beyond hydrogen-powered FCEVs, the German auto sector is no stranger to battery electric vehicles. For example, in November 2019, Elon Musk was in Berlin to announce that Tesla will build batteries, powertrains and vehicles, starting with Model Y in the new ‘Gigafactory 4’, close to Berlin. Battery electric vehicles (BEVs), not hydrogen…but certainly an important move in the broader German electromobility scene. Also in November 2019, VW re-confirmed its strategic focus in the electric vehicle race to be the production of BEVs for the masses.