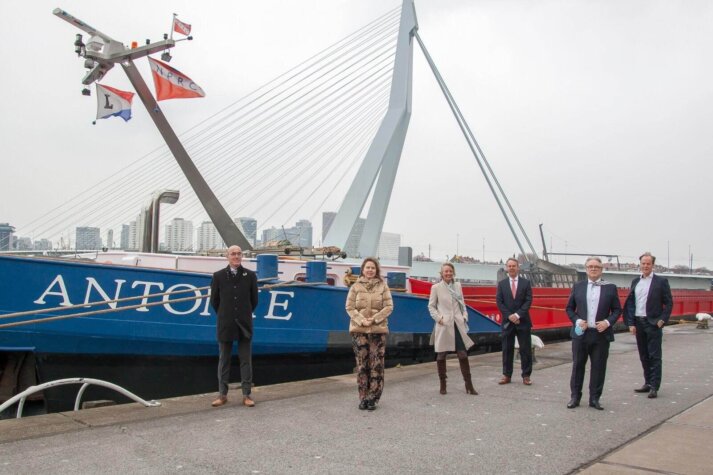 A grant has been issued by the Dutch Ministry of Infrastructure and Public, under its Green Deal initiative, in support of the first Dutch inland navigation barge powered by hydrogen fuel cells.

This supports the Central Commission for Navigation on the Rhine (CCR) vision, outlined in 2017, of zero emissions from inland navigation vessels by 2050.

The project, administered under the Dutch Green Deal for zero-emission shipping and ports, will not just be a flagship of the Dutch maritime hydrogen movement, but will likewise establish a backbone of maritime hydrogen refuelling options in both the Port of Rotterdam and the northern Netherlands Groningen Seaports.

The ‘Antonie’ will be a newly built inland navigation barge operated by Lenten Scheepvaart which will be responsible for transporting salt between the Port of Rotterdam and Groningen Seaports.

Therefore, this will connect two of the Netherlands largest hydrogen sources via inland waterways.

The charter will be issued by Nouryon, which will also be the hydrogen supplier, and contracted by the NPRC Cooperation with the fuel cell power system being provided by Koedood Marine Group.

Kees de Vries, Project Director at NPRC, said, “As a nation of shipbuilders we are in pursuit of leadership in zero-emission shipping, and we look forward to so in team with Nouryon and Nedstack.”

“Developing the Dutch maritime fuel cell eco-system will open up new markets and develops an export opportunity for our maritime ecosystem as a whole.”

The Dutch Green Deal on Maritime and Inland Shipping and Ports shows how the Netherlands intends to implement the Mannheim Declaration.

Furthermore, the Netherlands is Europe’s largest supplier of marine fuel which constitutes an extra incentive and an opportunity to show leadership in becoming a leader in the production, supply and use of hydrogen as a maritime fuel.