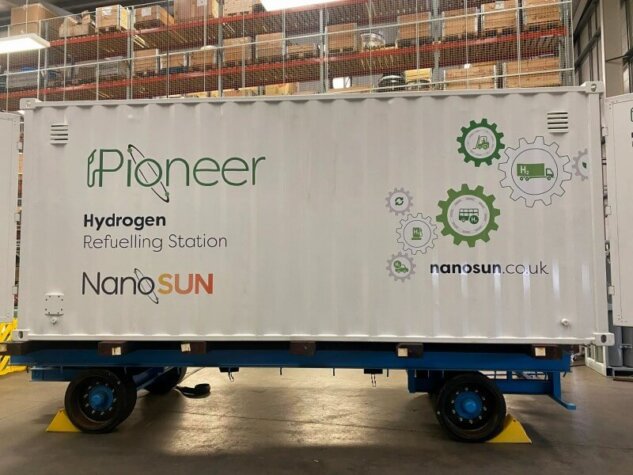 NanoSUN hydrogen refueller set for deployment in the UK

The UK is set to introduce NanoSUN’s first large-scale hydrogen refueller with a fill time of 15-20 minutes for large trucks and buses.

The Pioneer 135 prototype is a fully mobile, self-container and automated solution carrying approximately 350kg of hydrogen on-board, presenting a vital steppingstone in enabling the economic rapid deployment of the hydrogen ecosystem in the UK.

Based in the UK, NanoSUN announced today (7th April) that its first large-scale refueller is ready for deployment with the company preparing to launch field trials across the region.

It has been previously reported that despite the Pioneer’s compact and mobile design, typical fill-times of 15-20 minutes can be expected for large buses and trucks, with smaller vehicles seeing even better performance.

In NanoSUN’s vision for future vehicle hydrogen refuelling, the necessary complex chemical engineering operations happen at large scale in centralised hydrogen production plants, where they are most efficient.

High pressure hydrogen fuel is then filled into Pioneer hydrogen refuelling stations and transported to the point of use, where it is dispensed directly into hydrogen vehicles.

“Our solution enables multiple hydrogen sources and multiple hydrogen users to establish and scale quickly, matching hydrogen demand and supply. We look forward to showing what the Pioneer can deliver and to the next step to scale the commercial applications.”

A great advantage of the Pioneer hydrogen refuelling station is its value chain. Ensuring low-cost production of hydrogen, rapid distribution to the end user and simple consumption.