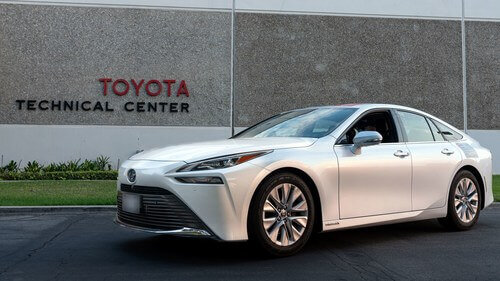 Toyota has revealed today (Oct 8) that its Toyota Mirai has achieved a Guinness World Records title for achieving the longest distance by a hydrogen fuel cell electric vehicle without refuelling.

In a tour of Southern California, the hydrogen powered Mirai achieved a distance of 845 miles before having to refuel trumping its previous record of 623 miles set in June, 2021.

The world record attempt was closely monitored by the Guinness World Records with the vehicle having to adhere to strict rules and documentation procedures.

The Mirai was driven by Wayne Gerdes and co-piloted by Bob Winger who endured a two-day trip which started on Monday August 23, 2021, at the Toyota Technical Center (TTC) in Gardena, California, home of Toyota’s fuel cell development group.

The two then travelled to San Ysidro, north to Santa Barbra and then along the Pacific Coast Highway.

When checked, this drive clocked 473 miles at the end of the first day.

The next day consisted of more driving loops as the pair pushed through 372 miles on the San Diego freeway between los Angeles and Orange County until the Mirai had no hydrogen left.

With this, the Mirai had achieved a grand total of 845 miles achieving the new world record whilst also consuming a total of 5.65kg of hydrogen.

“The Toyota Mirai’s journey without the need to refuel showcases the power of fuel cell electric technology. This technology and the design ingenuity by the team at Toyota led to a history-making moment.”