HyPoint’s breakthrough turbo air-cooled high-temperature hydrogen fuel cell system is the first of its kind to feature an air-cooling and oxygen supply system. HyPoint’s system offers unprecedented energy performance: at least 2,000 watts per kilogram of specific power and up to 1,500 watt-hours per kilogram of energy density, with plans to increase specific power to 3,000 watts per kilogram by 2024. The lightweight, climate-independent, extended-lifespan system dramatically increases operational time and utilization rate while decreasing total cost of ownership by as much as 50%.

In 2020, the company won the NASA iTech Initiative in which inventive technologies were ranked based on criteria that included technical viability, benefits to humanity, and commercialization potential.

By addressing core technological barriers associated with zero-emission flight, HyPoint is poised to cut years off commercial delivery timelines for hydrogen aircraft and unlock the emerging hydrogen aviation market, which has an anticipated 2030 valuation of $27 billion growing to at least $174 billion by 2040. HyPoint has announced agreements with ZeroAvia, the leading hydrogen aviation company, as well as eVTOL makers such as Piasecki Aircraft, which has partnered with HyPoint to develop the world’s first manned hydrogen-powered helicopter.

Globally, aviation produced 2.4% of total CO2 emissions in 2018. While this may seem like a relatively small amount, consider that if aviation was a country, it would rank 6th in the world between Japan and Germany in terms of total CO2 emissions. Non-CO2 effects, such as warming induced by aircraft contrails and other pollutants, bring aviation’s combined total contribution to global warming to approximately 5%. By 2050, this is expected to increase to 25% as other industries decarbonize more quickly than aviation.

There are several limitations to existing lithium-ion batteries: they can’t deliver enough power, they’re heavy, and they require frequent charging. On the other hand, existing hydrogen fuel cell systems require liquid-cooling architecture that is as much as two times heavier than the fuel cells themselves.

While it takes at least 500 Wh/kg to fly a plane for 600 miles or an eVTOL/air taxi 100 miles, current battery technology can only achieve 200 Wh/kg. Additionally, battery charging time determines a vehicle’s utilization rate (e.g. operational vs. idle/charging time). 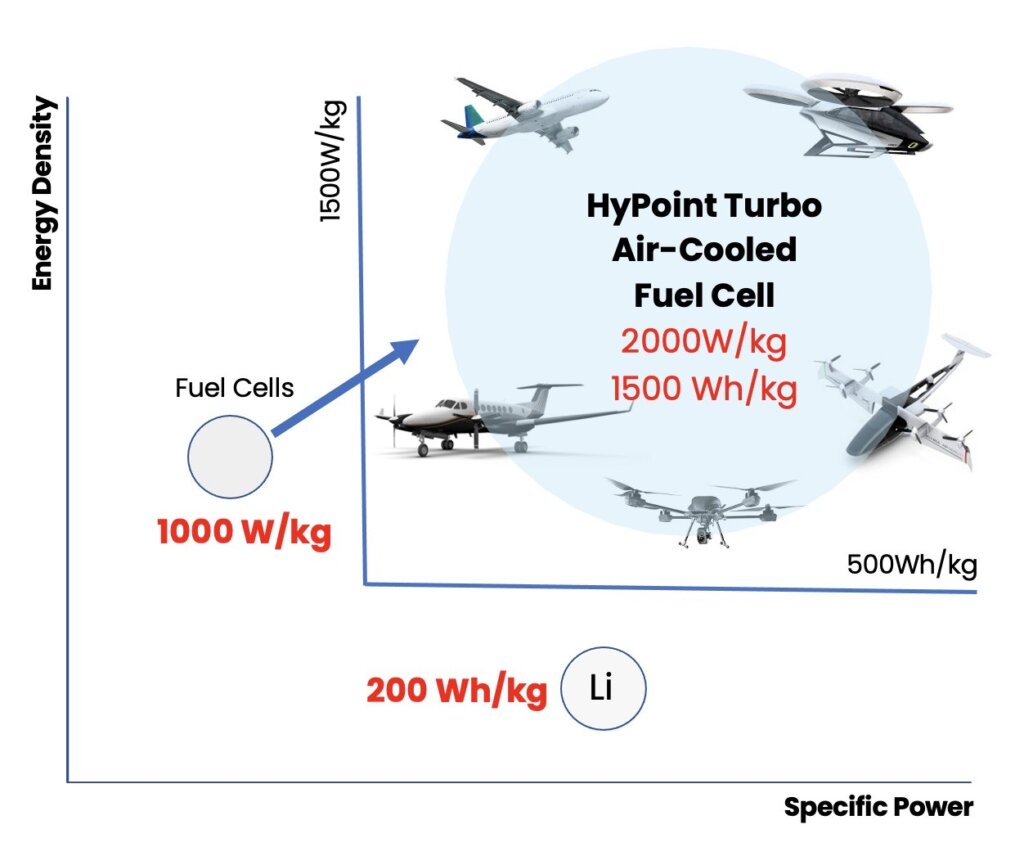 Hydrogen has the necessary energy requirements to work:

The only barrier preventing hydrogen-powered aviation has been specific power: aviation requires 1500 W/kg, but traditional hydrogen fuel cell systems have only been able to achieve 600 W/kg.

HyPoint’s revolutionary approach utilizes compressed air for both cooling and oxygen supply to deliver a high-temperature fuel cell system that is three times lighter than existing fuel cell systems — representing a total weight reduction of more than 60%. It also leverages a number of technical innovations including lightweight bipolar plates and a highly conductive, corrosion-resistant coating in order to radically outperform existing systems. 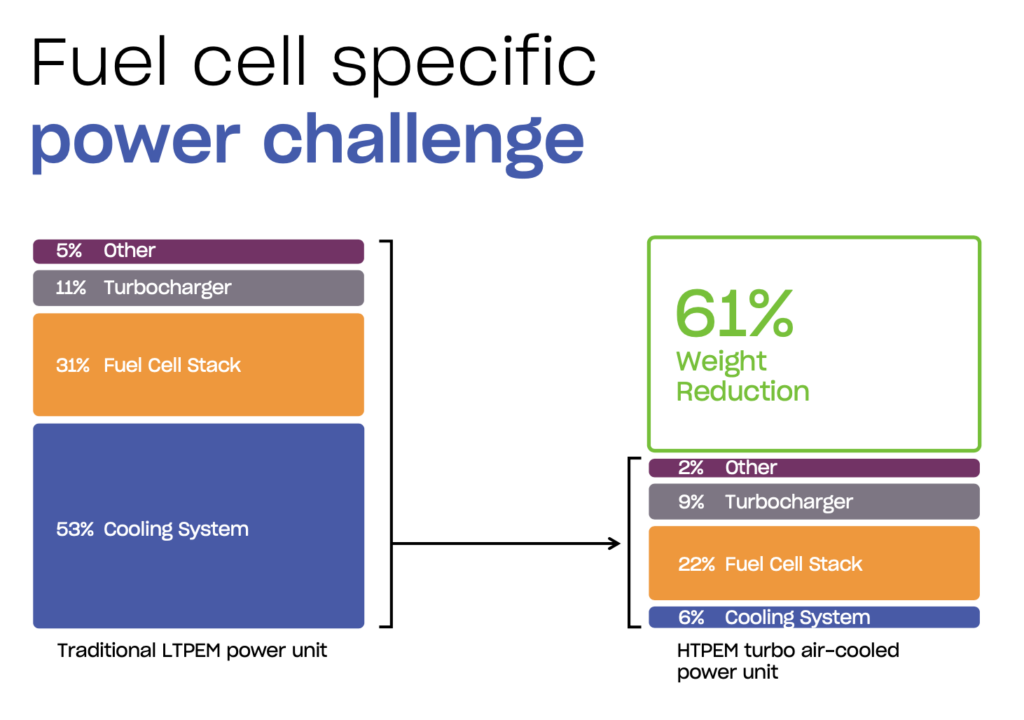 HyPoint’s turbo air-cooled hydrogen fuel cell system is the first of its kind to use both air-cooling and turbocharging.

While liquid-cooling was historically used to provide rigid thermal stability, HyPoint increased the maximum operating temperature of the system from 70℃ to 160℃ and developed specialized fuel cell bipolar plates with the necessary thermal conductivity. It consists of three primary components: the fuel cell modules (fuel cell stacks + integrated control components), a compression system, and a cooling fan with ducting. The simpler design eliminates the entire liquid cooling circuit, including the liquid coolant, pump, and tubing; radiator; and humidifier. Additionally, there is no need for a buffer battery in most aircraft designs because the system has a high specific power that can easily vary the power supply from 10% to 100%.

HyPoint uses “turbo compression” to boost power output and “turbo expansion” to reduce the power overhead, resulting in unprecedented operational efficiency. A turbo expander minimizes the energy consumed by air compression. Further, the design incorporates one to three compression stages, depending on the maximum altitude of the aircraft. When combined with the turbo compressors, these measures result in a 70% increase in the system’s available power. 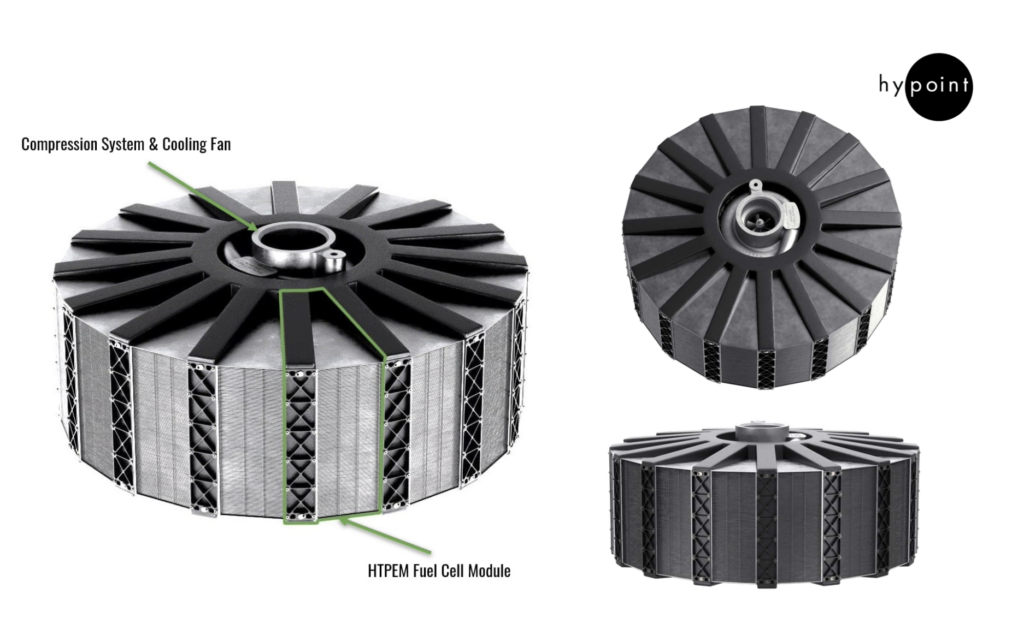 With its ability to partially recirculate the cooling airflow, the HyPoint system maintains a stable temperature range across the fuel cell module, regardless of ambient conditions. The higher safe operational temperature of high temperature fuel cells allows the cooling system to reject heat efficiently in any weather condition and at any reasonable operational altitude. The cooling never consumes more than 5% of the total power and together with the compression system’s low power consumption, the HyPoint system achieves an excellent operational efficiency of 40% to 50%, depending on the aircraft’s operational mode.

To further boost the system’s specific power, its design incorporates light-weight materials in the proprietary fuel cells. The bipolar plate, often the heaviest component of a fuel cell, is made from aluminum “foil”. Aluminum offers the excellent thermal and electrical conductivity needed by bipolar plates, but aluminum “foil” bipolar plates would not have been possible without the conductive, corrosion-resistant coatings developed by HyPoint.

The system contains between 12 to 20 fuel cell modules, depending on required output power and voltage. By integrating the control components with the fuel cell stacks into a modular design, HyPoint has increased the reliability of the system and can customize the output voltage using parallel-to-serial connections. Finally, the modular approach provides dimensional flexibility to meet the strict placement requirements of HyPoint customers.

The system provides the following advantages for air transportation when compared with lithium batteries: 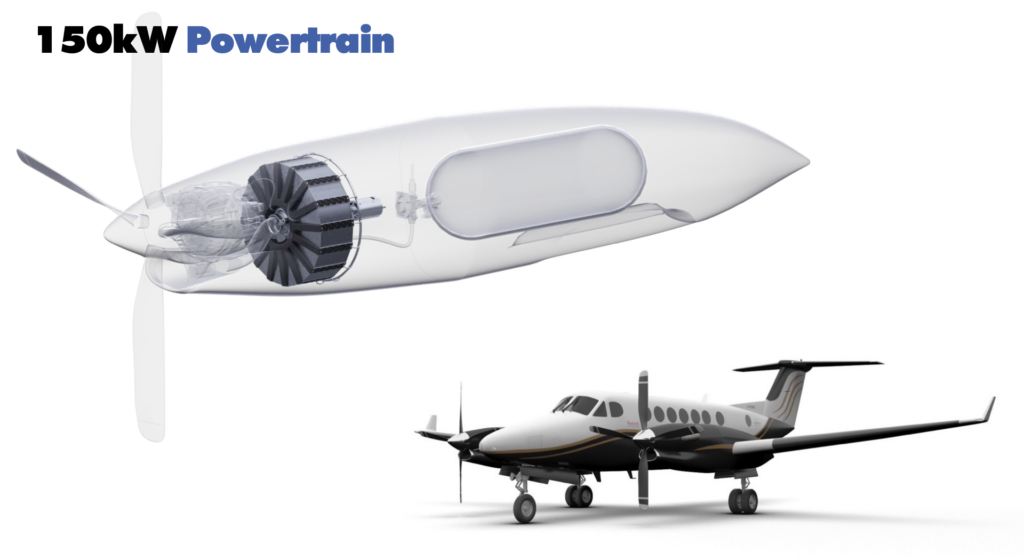 10MW electrolyser destined for Oklahoma, US

Oklahoma, US, is set to gain a 10MW solid oxide electrolyser as LSB Industries Inc., announce a project to generate green hydrogen that will contribute to approximately 13,000 tonnes of zero-carbon ammonia per year.

As green hydrogen production systems continue to be a focal point in scaling the hydrogen industry, Johnson Matthey has today (May 25) revealed it has invested €20m ($20m) into hydrogen pioneer Enapter.

Plasma electrolysers can use wastewater to produce clean hydrogen

A new agreement is set to see the commercialisation of green hydrogen in South Korea has been announced today (May 25), by Elogen and Valmax Technology Corporation.

The US Department of Energy (DOE) has provided a grant in order to support the development of an ultra-low NOx hydrogen burner technology which will enable the adoption of hydrogen fuel for industrial heating.

The Africa-focused transitional energy group, Chariot and the Government of Mauritania have announced today (May 24) that a pre-feasibility study for the ‘Project Nour’ green hydrogen project has been completed.